The 18 Best Movies With ATVs and UTVs in Them 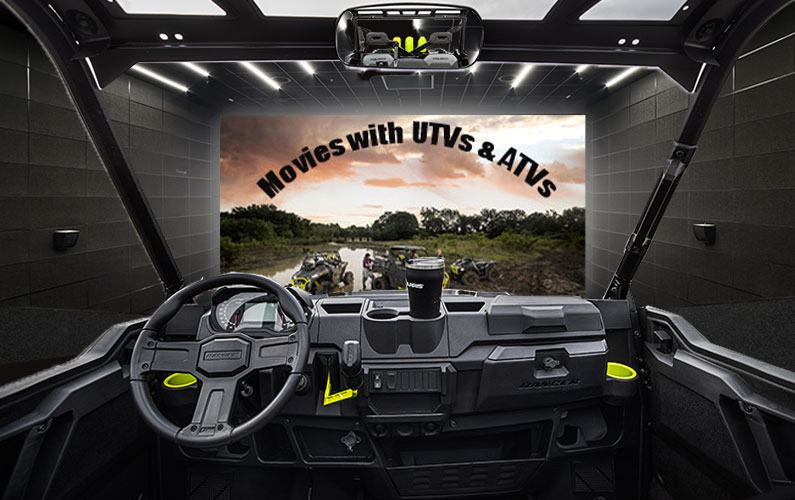 What makes a movie good? Is it the script? The acting? The action scenes? The jokes? Or is it the cinematography, whatever that is?

Or — if you’re anything like us — what makes a movie good is seeing something you love onscreen. Like a souped-up quad ripping through the desert, driven by your favorite action star.

And that’s why we’ve put together the definitive list of ATVs in movies — with some television shows thrown in for good measure.

But it’s not enough just to list them out. No, we’ve ranked them, with our criteria being:

Let’s begin our list with a few honorable mentions of movies and TV shows that don’t prominently feature quads in any interesting way, where you might see an ATV or UTV in the background: “Yellowstone,” “Wind River,” “Justified,” “Power Rangers,” and “Baywatch.” What keeps any of these off the list is that the ATVs are doing what they often do best: being practical and not doing anything too exciting.

(Okay, maybe “Power Rangers” is an exception. Leave us a comment if you think “Power Rangers” deserves to be more prominently featured on this list and we might reconsider.)

Now, let’s get into it. Although the first two on here are sci-fi movies that don’t exactly count but deserve a shoutout of their own for imagining what ATVs could evolve into.

Okay, now let’s start with two that arguably shouldn’t even be on this list, but we’ve decided they qualify:

We know what you’re thinking. “There’s no ATVs in Star Wars!” But that’s where you’re wrong. Arguably.

Those are called AT-AT, which stands for All Terrain Armored Transport. And yes, they have four legs, not four wheels. But their name does imply that they are ATVs, to quote Obi-Wan, “from a certain point of view.” 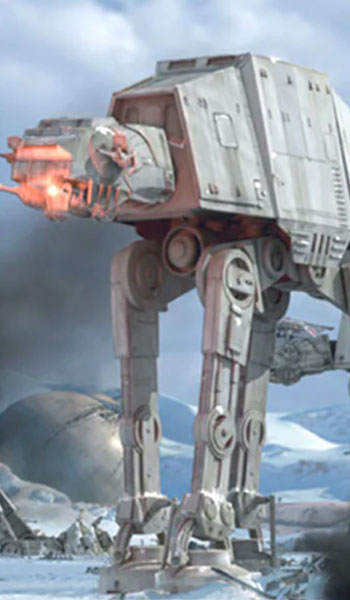 Okay, so it doesn’t really count, but we wanted to sneak this in because, seriously Disney, we’d all really enjoy a legitimate ATV chase scene on Tatooine in the next installment of “The Mandalorian.”

No. 17: The Alien Franchise

So this is the other one that doesn’t really count because it doesn’t look anything like the ATVs we know and love. But in the Alien universe, they call these babies ATVs — and yes, it stands for all-terrain vehicle:

Is this a real ATV? No. Do we think this is what ATVs will eventually look like? Also no, but Ridley Scott apparently does.

Oh, but wait. Maybe the Alien franchise does qualify more than you might think, as there is a modded sci-fi Polaris Sportsman that shows up in “Prometheus.” Let’s count this one double, but still — we aren’t ranking it higher than No. 16.

Moving on to the real ATVs now:

Let’s get something out of the way right now: the fans hated the ATVs in “La Brea,” which is why we are ranking this so low on our list. It’s not so much the way the ATVs factored into the plot but how little sense the scene made overall.

You can see a glimpse of the completely implausible ATV scene in second 14 of this promo for the finale:

So yeah, maybe don’t put that one at the top of your list.

Let’s say that, while this scene is fun, we aren’t ranking it particularly high because it fails on the safety level: cartoon dogs shouldn’t ride ATVs.

That said, if your family likes watching kid-friendly movies AND you’re looking for one that has a pretty fun ATV scene, then look no further than the “Scooby-Doo” film starring Freddie Prinze Jr. and Matthew Lillard.

Admittedly, this is a newer movie that no one has really seen yet. But, based on the trailer (watch until the end) it appears that a UTV shows up.

Hard to tell the precise model but, yeah, if someone wants to watch this and tell us how good the scene is (and the movie overall), we can move this one either up or down on the list.

If you don’t recall “Without a Paddle,” let’s refresh your memory: it’s the other Matthew Lillard film from the early 2000s that features an ATV chase scene.

While this scene is certainly more realistic than the “Scooby-Doo” scene, it still leaves something to be desired, including the fact that the ATV riders (who Lillard and friends steal their ATV from) are not the most flattering stereotype of riders.

While “Playing with Fire” is a relatively funny, kid-friendly John Cena movie, there’s one major issue with the ATV scene in it: it’s too short.

Seriously, they couldn’t even give us a full minute? Also, why doesn’t Cena himself get to ride an ATV? Maybe the next season of “Peacemaker” will give us the Cena-on-an-ATV scene we deserve.

Now we’re getting to the good stuff. “Cradle 2 the Grave” features an incredible scene of DMX outrunning cops (to his own song on the soundtrack) and it includes a character saying, of DMX, “that guy’s got my quad.”

“And get this, folks, he’s driving an all-terrain vehicle” is another line in this scene.

While we certainly do not advocate for a) driving a quad through downtown Los Angeles, b) driving one to outrun the police or c) not wearing the appropriate riding gear, this is still a pretty darn good ATV scene and one that belongs in the record books. (We’d rank it higher if it weren’t for all the safety and traffic laws violated in it.)

While we mentioned “Baywatch” the show in our honorable mentions, “Baywatch” the movie stars Zac Efron, Dwayne Johnson, and, most important, some Suzuki DL650s.

Show up for the lukewarm banter, stay for the attractive people riding your favorite quads.

The Argo ATV. Not a product you are familiar with, unless you watch a lot of Star Trek — but maybe you should be.

Sure, “Star Trek: Nemesis” is one of the worst Star Trek entries, but that doesn’t mean the Argo isn’t a totally sweet vision of what UTVs might become:

Check this thing out. Now someone call up Patrick Stewart and tell him the next “Picard” season should be entirely set in a desert with plenty of quads and bounty holes.

This scene includes the line “good thing my middle name is dangerous” and includes some legitimately cool riding.

No, we do not recommend anything done in this scene, especially considering these were certainly stunt drivers doing the work. But yeah, it’s pretty funny (and there’s more ATV stuff than the clip above.)

Have you ever wanted to watch Don Johnson (of “Miami Vice” fame) explain why ATVs are better than jet skis? If so, look no further than this clip from the second season of “Eastbound & Down,” which takes place immediately after a thrilling ride.

(Warning, before you watch this one: there’s some pretty crude language in this clip.)

Next time you’re in an argument about whether ATVs or jet skis are better — and yes, you know that will happen — try out Don Johnson’s line:

“Have you ever climbed to the top of a mountain on a jet ski?”

We had to include this one. You might’ve forgotten about this part. Napoleon Dynamite’s grandma rides an ATV. Sure, it doesn’t go very well, but it happens. And at least she took the proper precautions by wearing a helmet!

Hard to tell for sure what she’s riding, but we think it’s a Yamaha Raptor.

Are we the only ones who watched “Westworld” and said, “Wait a minute. Was that a Can-Am Maverick?”

Well, we certainly aren’t, as they’ve been written about on Jalopnik and extensively on some fandom websites for “Westworld.” And while we couldn’t find a good clip of them in action, let’s just say that they’re in so many scenes of the second season, they’re practically one of the characters.

We are packaging these two together, because “12 O’Clock Boys” is a documentary and “Charm City Kings” is the movie inspired by it.

These are two of the most under-the-radar films on this list, but we recommend you make some time for them. Even if, once again, a lot of what’s happening in them isn’t quite street legal and not something we’re going to endorse.

One of the most famous ATVs in the history of cinema — and maybe the first on the big screen. It’s hard to beat James Bond’s ATC90 from 1971 in “Diamonds Are Forever.”

We don’t care if the next James Bond is Idris Elba or Jason Statham, as long as Bond gets to ride a quad again.

We didn’t have this one ranked as high until we realized that there is a full-blown snorkel in this movie. Sure, it’s not the greatest movie, but it does star Superman, the guy from “Call Me By Your Name,” a sandrail custom-built for the movie and a snorkel.

Sure, while this scene is wildly improbable and we would never recommend using a snorkel kit in this extreme of a manner (the warranty probably wouldn’t cover it), it’s still as badass as UTV scenes get.

This is as good as ATV movies get, because it’s not a scene or two. It’s the whole movie.

ATVs, UTVs, chase scenes, survival, the desert. Tom Hardy and Charlize Theron. All by the guy who directed “Babe” (yes, the movie about the talking pig). What else could you want? (Oh, and let’s not forget that “Mad Max 2” also had some ATVs in it.)

These movies are so iconic that if you say “Mad Max ATV”, people have a pretty good idea of what you’re talking about and what you’re planning on doing with it.

Are there any movies with ATVs we forgot about?

So yeah, which ones did we forget? Let us know and we can write a sequel! Or go film your own ATV movie. The world could use some more.