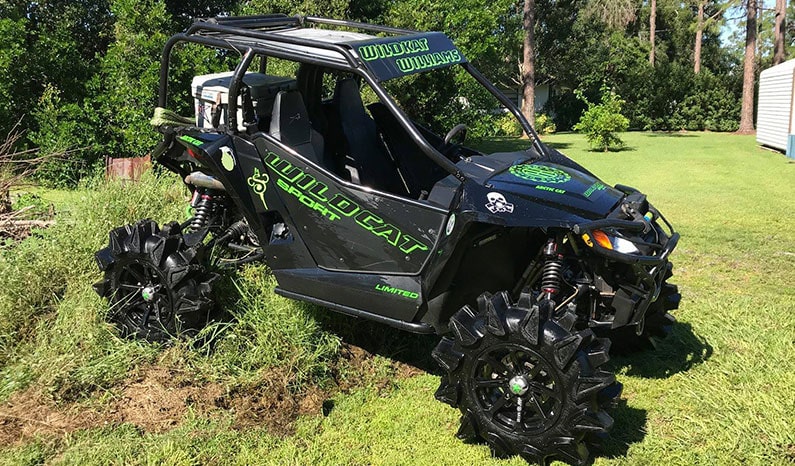 Glenn Cooper is the Branch Manager for Glade & Grove Supply Co, an Arctic Cat / Textron Offroad dealership in Avon Park, Florida. In 2016 when Glenn became an Arctic Cat dealer, he and his nephew Jason were looking to build a machine to promote SxS sales at their shop.  Glenn’s part manager was already working on a big Wildcat X build, so he and Jason decided to go with the Wildcat Sport 700. The thought was that a light side by side with big nasty tires and low gearing would be different and probably go places others can’t so parts were ordered and the build began. 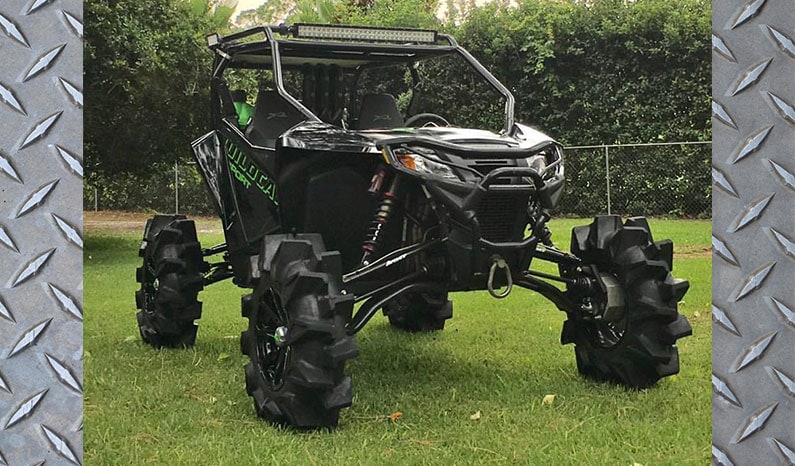 Tires were a sticking point for Glenn and Jason, so after some research they ruled that the most aggressive, toughest and smallest carcassed tire they could find was the 32” Juggernaut. With the 32” tire size in mind they knew they would need some gear reduction to take stress off a rig that comes stock with 26” tires so they equipped the Wildcat with Super ATV GDP 4” Portals. “With the portals installed and the Juggs mounted on MSA M12 Diesel Wheels we knew we had a badass machine” said Cooper. 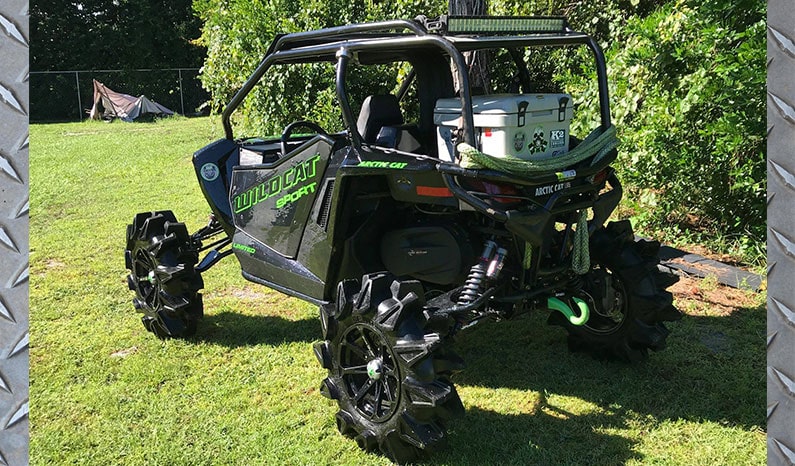 A day ride in some deep mud and water made them realize that although the build was badass, it desperately needed some snorkels and a custom cage. For the cage they went to Slo No Mo Fab for a custom full length cage that covered the cab and bed with an aluminum roof. Once the cage was on they modified the bed to mount a K2 30 Cooler. With the cooler in and strapped down, they rigged up the magnetic lid holder. “The lid holder sounds simple, but if you’ve ever smashed your hands with a cooler lid you will appreciate this innovation” states Cooper. 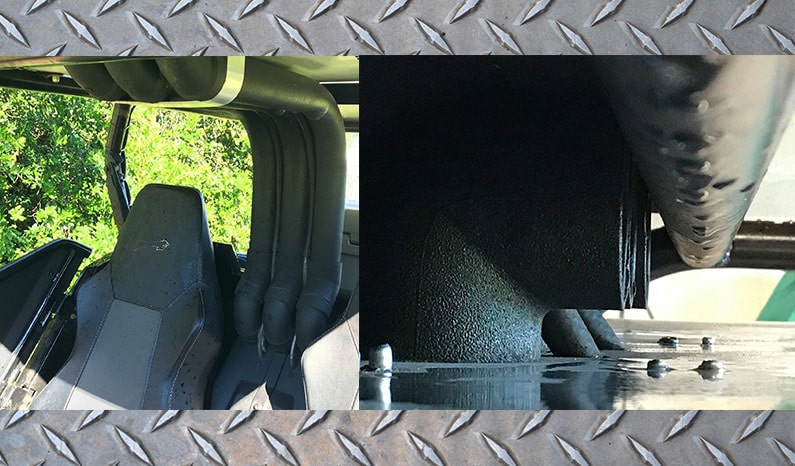 Glenn and Jason equipped the machine with a Snorkel Your ATV Warrior Riser Snorkel Kit, the kit worked great but as Glenn went deeper and deeper he knew he needed them taller. “I began by redoing the SYA system with custom pieces of my own behind the firewall” explains Cooper, “then sat there and looked at it for a couple of hours coming up with crazy idea after crazy idea. Then it hit me, I have a mandrel for hot bending PVC! Once I figured out that I was going in that direction I was templating, heating and bending for a whole weekend.”  Glenn ended up bending the three 2” PVC uprights a little over 90 degrees, then coupling them through the roof. With the snorkels through the roof he figured they could get damaged if he left them uncovered. He then went to templating a visor and built one out of one piece of aluminum. 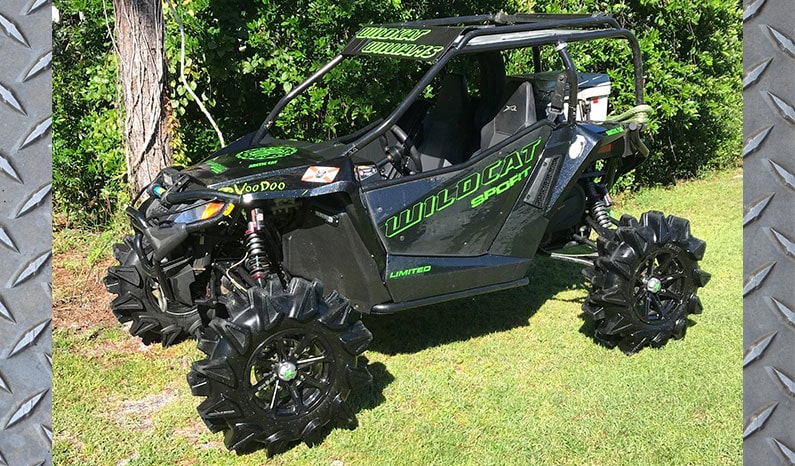 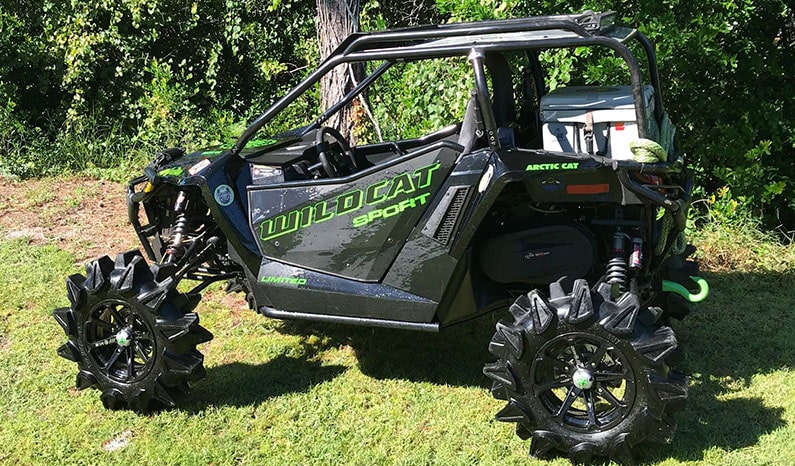 “Once the snorkels were moved above the roofline I lost all care and went “hold your breath deep” from then on” states Cooper. “I have gone through the little pond or the “Glenn Pond” as friends and family call it, several times with different riders and every time we have made it through without any problems. Going deep for me is fun because it is a little scary, I don’t check how deep it is I just hit it and see. Some people say it’s crazy, a waste, stupid or even fake, but when you come out the other side it’s an awesome adrenalin rush.” 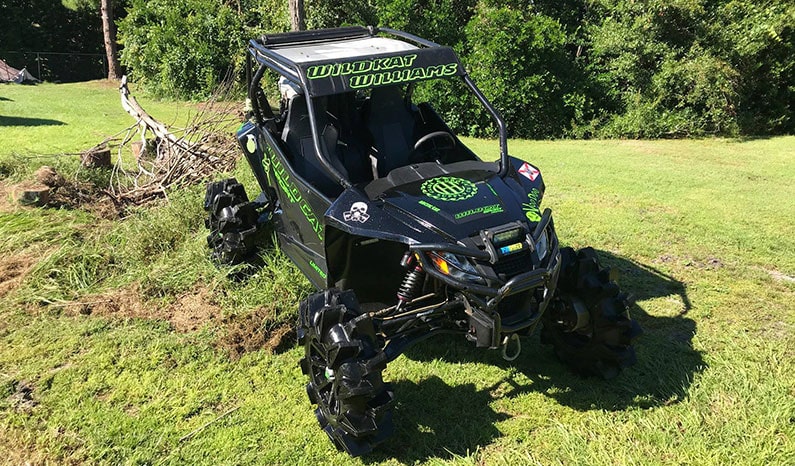 “WildKat Williams got its name from Jason and I doing what we do, spitballing ideas that the other ruthlessly shoots down until we say one that both of us doesn’t hate” Explains Cooper. “We were going back and forth when we said something about the machine being pimped out, that got us to little pimp and that got us to The Lil Pimp, Katt Williams. At that point one of us said WildKat Williams and it has stuck ever since.” 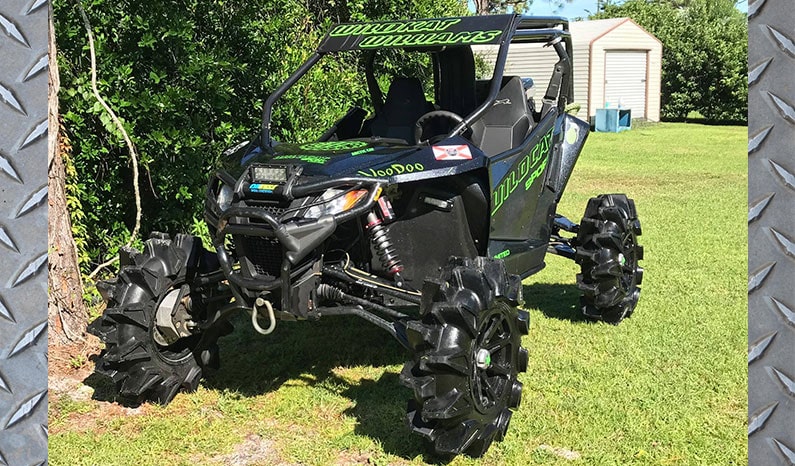 Glenn confidently tells us that WildKat Williams is very capable with the current setup and says that it will go most place others can’t. When cutting trails, Glenn is usually the guy to make the new path. Aside from Glenn’s sheer lack of care, the lightness of the machine and aggressive tires give him an advantage; not to mention the lower gear reduction.  All in all, Glenn has been very impressed with how well it performs and how durable it is. 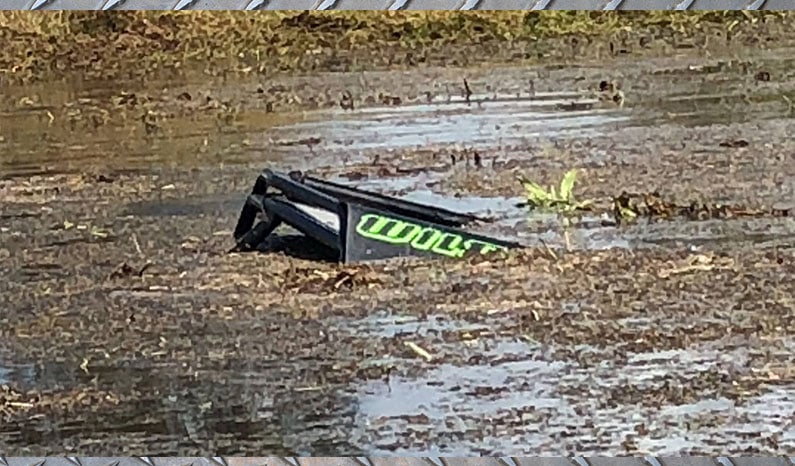 “In August of 2018 I went into a new hole we just started going to and like the badass/dumbass I am I went through in 2WD. This was working for me but got sketchy after the 4th or 5th time, then I put it in 4WD. Once in 4WD I feel unstoppable and went right back in the sketchiest spot, well with full dig going, I dug in and hammered it. Then my forward progress stopped, I hit reverse (my life saver) and I went backwards for a second or two and stopped again. At that point I was holding my breath but still had my eyes out of the water.  I shifted in to drive, I felt it go down and I was fully submerged. I knew it was the end if it didn’t move and it didn’t so I killed it a bailed. It took 5 minutes to get Kat out (me not finding my hook and lost my hat) but I wasn’t frazzled, I knew this day would come. As soon as we got it high enough I drained the airbox and drug it back to the truck. Once back at my tools I drain the CVT and pulled the spark plugs, turned it over until we had only fuel, reinstalled the plugs and put Kat back together. Started the motor, checked the oil a few times and rode the rest of the day. Side note: still haven’t changed the oil and it still looks like oil. Lol”  – Glenn Cooper

Whether you have an Arctic Cat Wildcat, Polaris RZR, Can-Am Maverick or Yamaha YXZ 1000R, Side By Side Stuff has a wide selection of UTV accessories so you can customize your own build. Browse today by visiting SideBySideStuff.com.

More from Side By Side Stuff
MTX Audio's Custom Arctic Cat Wildcat, “The Junkyard Cat”