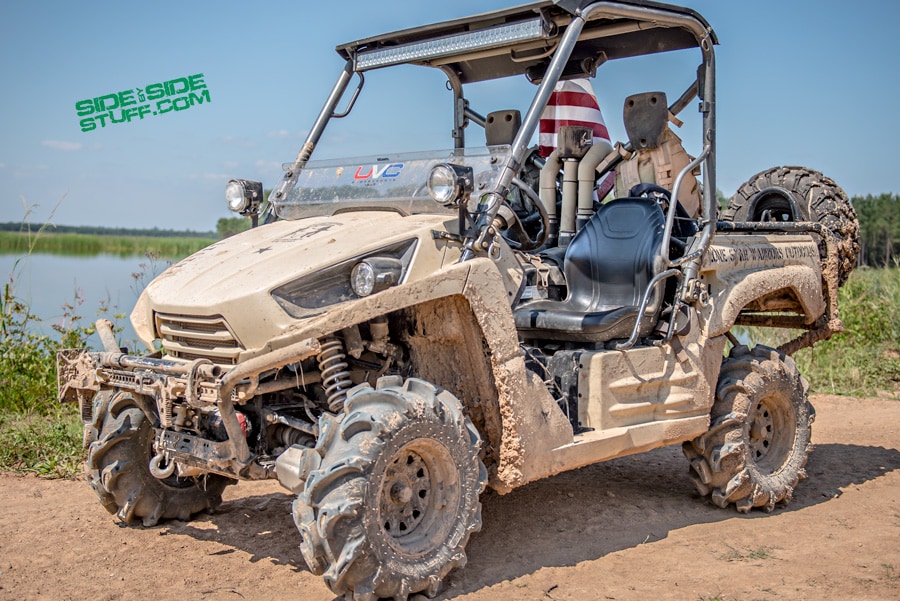 This year, my 4th of July was spent kicking up some dirt and plowing some mud at the brand new off road ranch named, “Muddy Bottoms ATV and Recreation Park.” Muddy Bottoms is a fantastic place to spend a holiday weekend with lots of activities, mud pits and miles of trails. This 4th of July weekend Muddy Bottoms worked with the group, “Muddin’ for the Military” to raise money for the charity “Lone Star Warriors Outdoors.”

While enjoying the holiday festivities at Muddy Bottoms, I had the great fortune of running into Chris Gill and got to spend some time getting to know him and learning about his passion. Chris is the founder and president of the non-profit charity called “Lone Star Warriors Outdoors.” Chris is very passionate about “Lone Star Warriors Outdoors” and took some time to tell me about his charity.

It is the mission of “Lone Star Warriors Outdoors” to get wounded warriors back into the outdoors through hunting and fishing. After being injured himself in 2005 in Afghanistan, Chris was accepted to participate in a hunting trip which gave him the desire to start helping fellow brothers and sisters who are wounded in combat. He knew first hand the healing power that spending time in the outdoors with fellow injured service men and women can have.

The money raised during the 3rd annual “Muddin’ for the Military,” will be used for “all expense paid” hunting and fishing trips. The goal is to provide 308 rifles, scopes, camouflage clothing, knives and any other hunting related items that are needed. Round trip travel expense is also provided at no cost to the wounded warrior. The trip gives the warrior a chance to be with other injured service men and women who are going through similar trials of life and talk with others that understand what they are going through.

UVC Power Sports, one of the great sponsors of “Lone Star Warriors Outdoors,” donated a 2012 Kawasaki Teryx. This is no ordinary Teryx however, as it is a full military version built for deployment in the Middle East. It is one of 2,000 units that were built; this is the only one that wasn’t deployed and released for civilian use.

This Teryx has options like tires that are filled with air balls which allow the tire to be shot 7 times before going flat. It has infrared lights to allow driving with night vision goggles. The rig has skid plates underneath, bumper mounted jacks and a two tire carrier on the rear bumper. It has snorkels allowing it to drive into deep water and supper bright LED lighting in the front and rear of the vehicle. It also has a beefed up suspension making this one unique side by side!

It was a pleasure getting to spend some time with Chris and learning about his organization. If you would like to learn more or donate to the “Lone Star Warriors Outdoors” you can do so by checking out www.LoneStarWarriorsOutdoors.com. You can also check out www.MuddinForTheMilitary.com for details about the next event. For information about where the event was held check out www.MuddyBottomsAtv.com