First in the world for aftermarket Polaris Slingshot parts and accessories, Alpha Powersport designs, engineers, and fabricates products for the new machine out of their large shop in Houlton, Wisconsin. It all started when restaurateur and motorsports enthusiast Henry Chan saw an ad for the new Slingshot. “What the hell is that thing?” Chan remembers thinking to himself “It looks like the friggin’ Batmobile!” Chan had to have one and placed an order for the new 173 HP vehicle prior to its release from Polaris. Chan isn’t the type of guy who can keep a toy stock; he was already making plans for better looking and faster Slingshot.  Chans desire to upgrade his personal Batmobile led to the creation of Alpha Powersport. 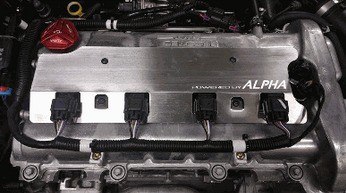 Chan and co-owner Andy Rosenau had the jump start for the machine “We had parts for the Slingshot before the Slingshot was released to the public.” Chan explains that once he learned the Slingshot was built around the common GM engine, he quickly pulled one of the engines from a salvage car and began engineering add-on parts like the coil cover and gas cap cover. It was also helpful that Polaris is headquartered nearby in Medina, Minnesota; this made it easier for Chan to get access to Slingshot models that where delivered to early buyers in the area. Although Polaris is aware of Alpha Powersport, the privately owned business isn’t in any way affiliated with or endorsed by Polaris.

Alpha’s business is booming, the company is gaining attraction by exhibiting at motorcycle trade shows around the country and has sold thousands of parts for roughly 10,000 slingshots while on the road. “The way it’s going right now, it’s probably going to get pretty big,” Chan says. “We’re on the ground floor. Our parts are improving.” 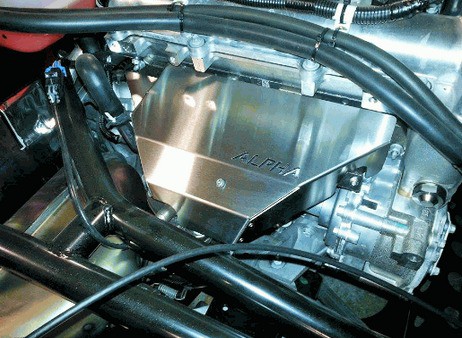 If you are now a proud owner of the new Polaris Slingshot and are like Chan you’re in the right place. At Side By Side Stuff we carry a variety of aftermarket parts and accessories from Alpha Powersport including side exit exhaust, cold air intake kits, Alpha Powersport/JRI 2-Way Adjustable Suspension shocks, skid plates, coil covers and more.

More from Side By Side Stuff
Off-Road Vixens Clothing Co. | Girls Get Dirty Too

To view these great products visit our Alpha Powersport brand page at SideBySideStuff.com