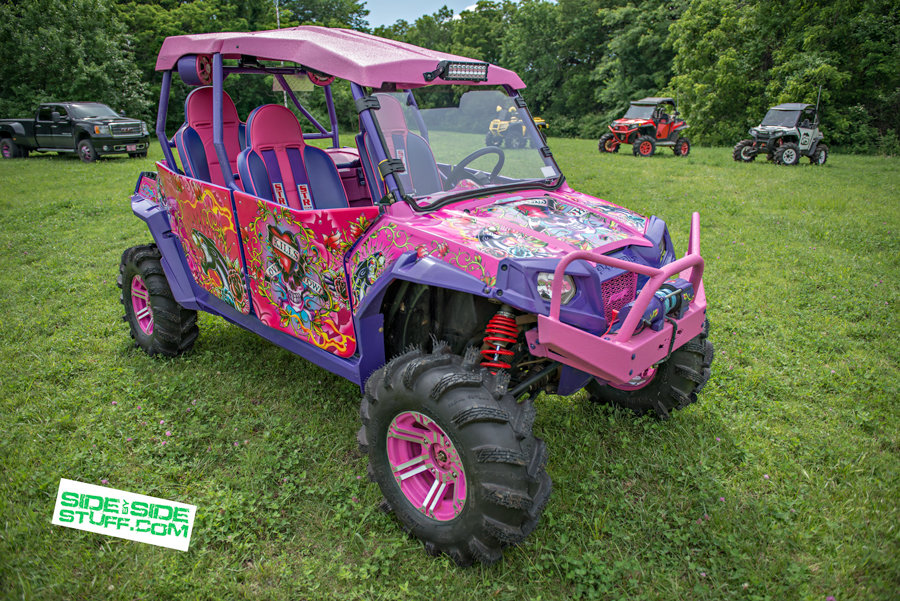 When it comes to off road motor sports, I think it’s safe to say that in the past, it was considered a sport populated mainly by males. The explosion of the UTV and Side by Side off road scene is also populated on the male side, but that is a trend that seems to be changing. We have witnessed more and more Side by Side purchases by female UTV enthusiasts and have noticed many more females piloting their own rigs at rallys that we have recently attended. It’s a trend that we are excited about and expect it to explode as the UTV industry continues to rapidly expand.

Several months back, we attended the RZR-Back Rally at Mack Pines, located near Dover, Arkansas. That is where we caught up with Heather Beem and her one of a kind RZR 4 800. The RZR-Back Rally had many female piloted UTVs, but Heather’s rig stood out from the rest and really caught our attention. With wild colors and a uniquely designed graphics concept, we knew without asking that Heather’s RZR was designed by a female UTV enthusiast for a female UTV enthusiast. We knew we had to feature her and her awesome ride!

Heather’s ride started its life as a 2011 Polaris RZR 4 800 Robby Gordon edition. She explained to us that she was tired of other enthusiasts thinking that it was her husband’s RZR, so a transformation was in order. Heather loves the color pink and knew that if she changed the color of her rig to pink and purple, there would be no mistaking who owns and pilots the head turning rig.

The transformation was from the ground up with all the work being completed by Heather and her husband, Jeremy. They started by chopping the roll cage 6″ in the rear and 3″ in the center. The whole body, roll bar, roof, dash and winch were given a coat of either purple or pink paint. The RZR was given a 2″ Rubber Down lift kit so the 30″ High Lifter radial outlaw tires on the S&S 14″ wheels wouldn’t rub. A set of Super ATV Rhino Axles and a power steering unit were also added.

Next, a set of EMP bumpers were Rhino Lined and installed as well as a Polaris Lock and Ride Rhino Lined roof and a windshield. A set of 4 UTV Inc. doors were painted to match the body and installed with custom Ed Hardy “Love Kills” graphics to match the graphics on the body. To round it out, PRP Seats supplied the pink and purple color-matched racing seats, and Heather located a set of purple 3″ 4 point harnesses from STR.

The Beems are true UTV enthusiasts and the time they spend riding is truly a family experience. They have two other RZR 800’s with husband, Jeremy piloting his own custom rig as well as their young son Lance. The Beems spend several weeks a year camping and spending quality family time enjoying their UTV’s; family and friends are what the UTV experience is all about!