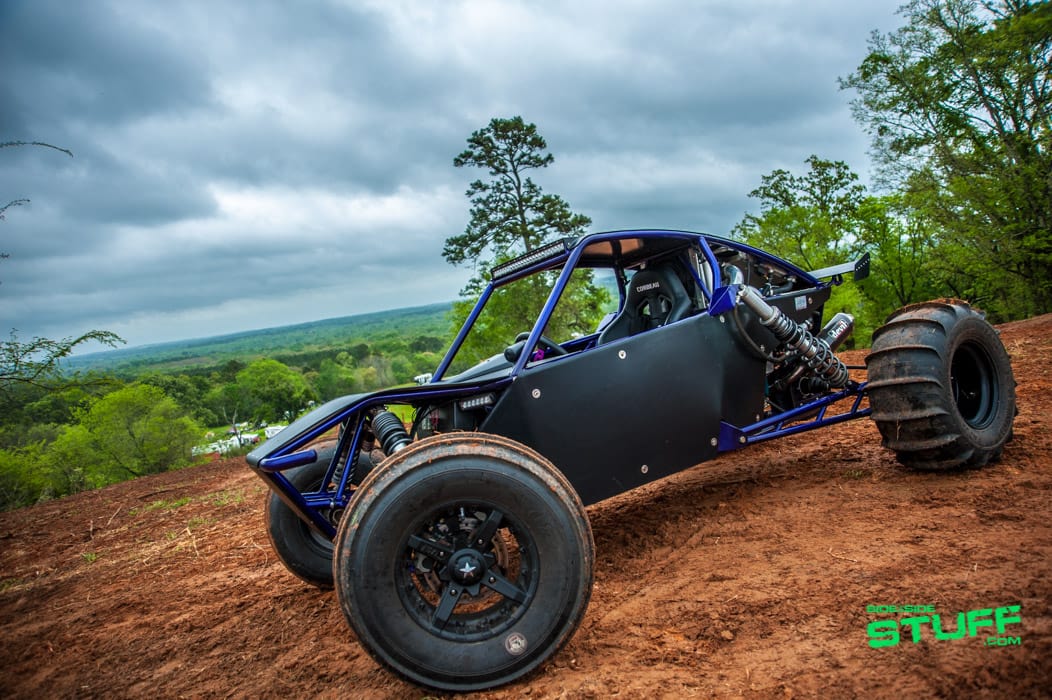 South Texas off-roader, Joey Kacal, used to be all about riding in the mud but that all changed in 2013 after his first trip to the dunes in southern California. His passion for a new style of riding made him a rare breed in south Texas and Joey tells us that he has no intentions of going back to the mud.  “Every year we take a two week Thanksgiving trip to ride in the desert around the Niland area” says Kacal, “of course the best sand dunes in the lower 48, Glamis baby! It changed my world!”  For Joey, it started out as an obsession to be as fast as the big sand cars and in the future to possibly own one.  Since he wasn’t farming money trees, he felt as if his options were limited. So to keep up with the big dogs he took his extensive knowledge of building roll cages and wrenching on his own “junk” to build a car from scratch. 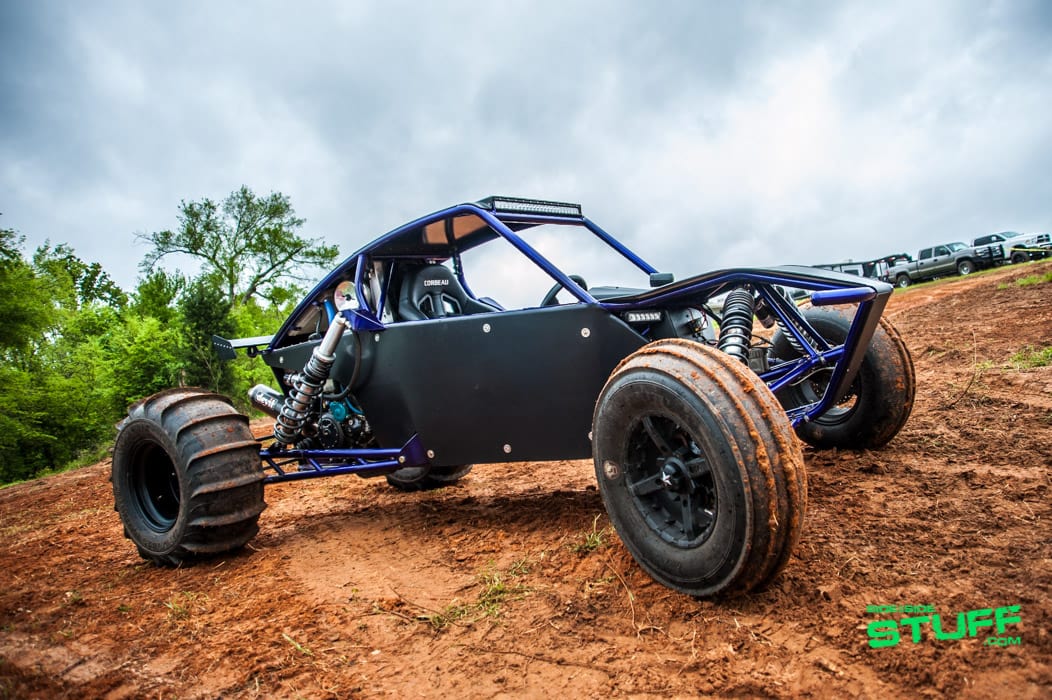 “I own and love Polaris RZRs” says Kacal, “so of course, I had an idea of what I wanted to build.  Something small and compact with enough power to climb anything in its path.” So it started… He ordered some tubing, some aluminum, and bought a very low mile gen 1 Hayabusa. “There is just something frightening about the sound of a street bike motor revving over 10k that gets me excited!” says Kacal. 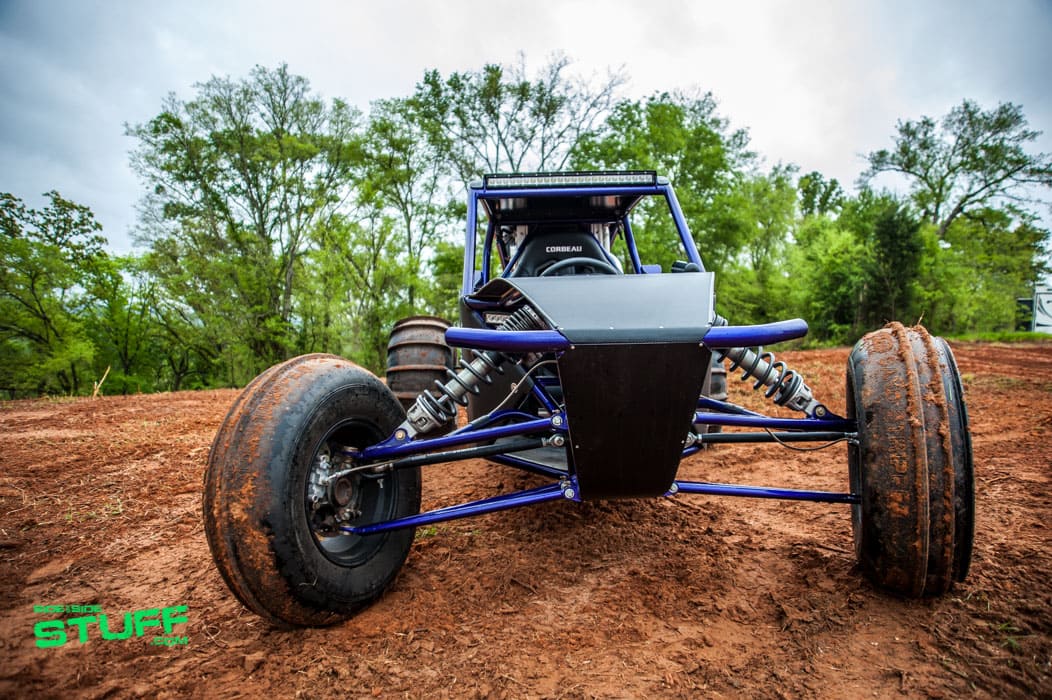 He stripped the powerplant out of the donor bike, sold the frame and started bending tubing with zero prints or plans, just a mental picture.  With the help of a good friend and fellow enthusiast, Jordan Dettling, they managed to knock out most of the frame in a single weekend. Being a budget build they used whatever spare parts they could get their hands on.  “I had a set of a-arms off of a Polaris RZR 1000, as well as the shocks, knuckles, spindles, brakes and a set of Assault Industries Radius Rods.  The rear chunk came out of a RZR transmission and was machined to accept GSXR sprockets for easy off the shelf parts if needed in the future.  The spoiler is held on by connecting rods out of my RZR 1000 when I went big bore. Pretty much everything else was built by hand and imagination with the exception of the steering, brake cylinders, etc.”

More from Side By Side Stuff
MTX Audio | Mud Nationals 2021 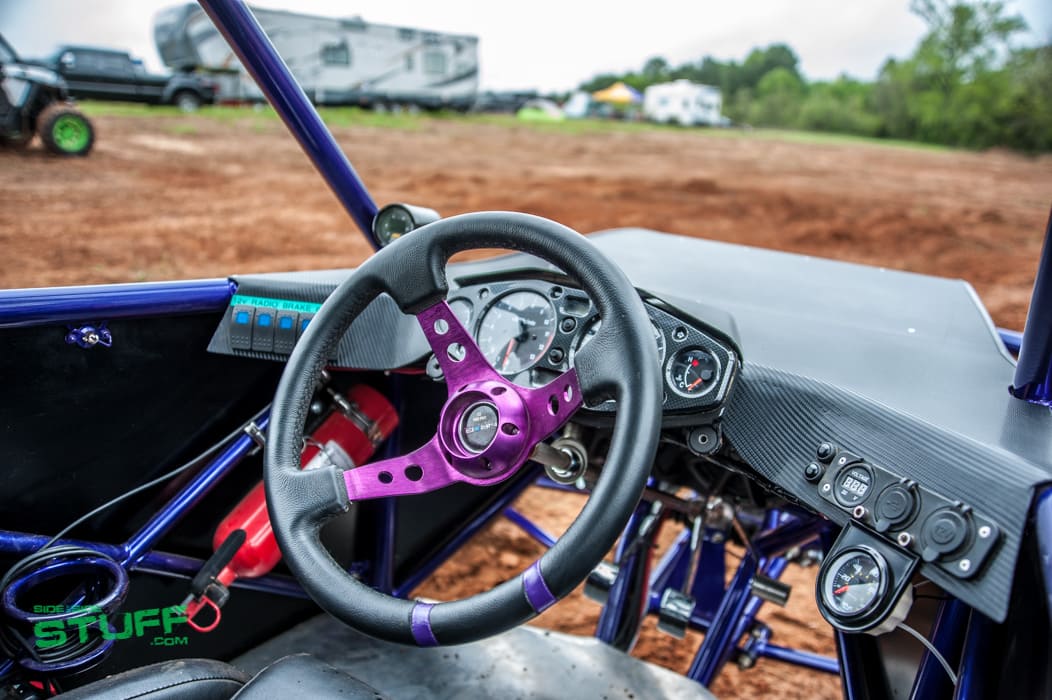 Joey and Jordan started the build on September 21st of 2015; by November 8th they took if for the first test drive. There was no aluminum body work but they had a driver. They built the full aluminum skins around November 15th and on Thanksgiving Day it made its debut at Glamis. “It was nothing but bare metal, bare aluminum, and a seat but she ran 104mph down Gecko rd.  Not bad, but still room for improvement…” said Kacal.  “When we finished our two week vacation and made it back to El Campo, TX, round two of the build commenced.”

They broke the whole machine down to nuts and bolts and sent it off to powder coat.  They went with a candy purple powder coat, because Joey says being beat by a purple buggy tends to sting a little more than a traditional color. While the frame was off to powder, Joey decided to up the ante.  He located a stage 2 turbo kit, Carrillo rods, APE heavy valve springs, JE pistons and base spacer to drop compression and get it ready for boost.  While the engine was tore down in his shop, he went ahead and did the full race cut trans and hardened shift shafts (Hayabusas are notorious for bending shift forks and losing 2nd gear….).  All the power is transferred to the ground with the help of a NLR boost compensating clutch cover.  As boost pressure increases, it increases the clamping force on the clutches so all the power makes it to the ground. 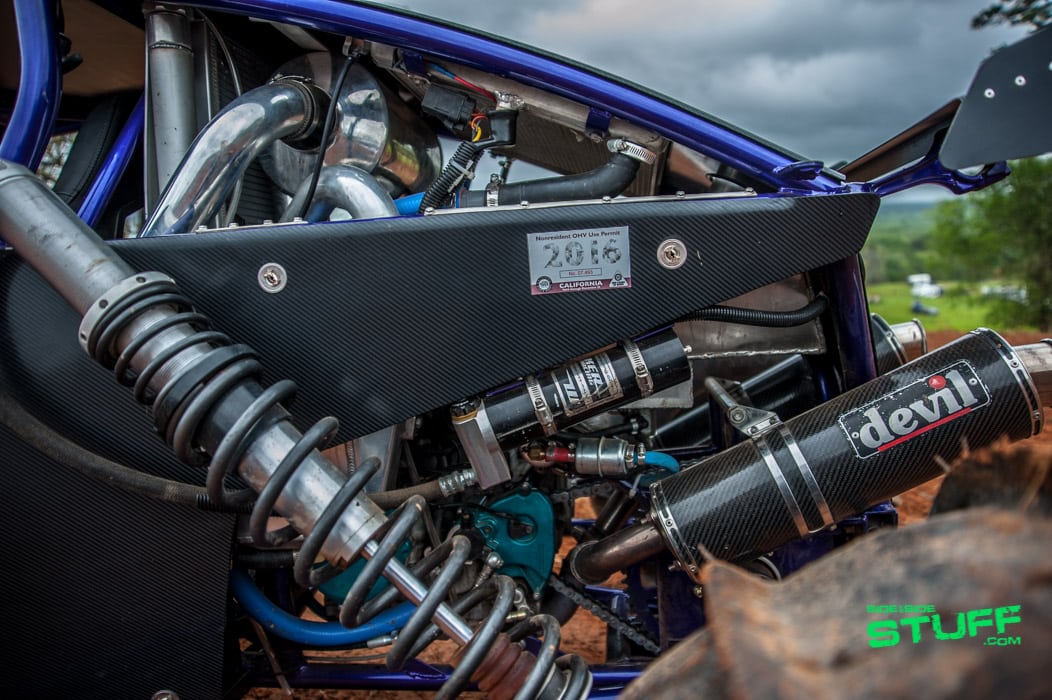 Once the frame was back from powder coating, Joey started fabbing the turbo piping, plumbing, etc… He built the full air to water intercooler setup, piping, etc from scratch; for some reason there aren’t kits for these things. “We got to take it out a few times on a very low and safe boost level to the local riding spots and she ran strong… still more to be desired though.”  On February 27th of 2016 Joey and Jordan took it to the dyno. On low boost it was a not very impressive, 154 HP to the rear tires at a very low 6lbs of boost, so they started bumping boost.  At a pump gas friendly 14lbs of boost they were up to 241 RWHP which moves the little 900lbs single seat pretty well.  “Mind you this is on an uncalibrated car dyno and they call it the heartbreaker,” said Kacal. “I saw why it had that nickname on the first pull out of the box, yet I was happy with the 90 RWHP with only 8 more lbs. than she rolled in at.  We haven’t made it back to the dyno yet but when we do, it will be settled in somewhere in the 25lbs-30lbs range and should easily make around 400 HP to the ground.” 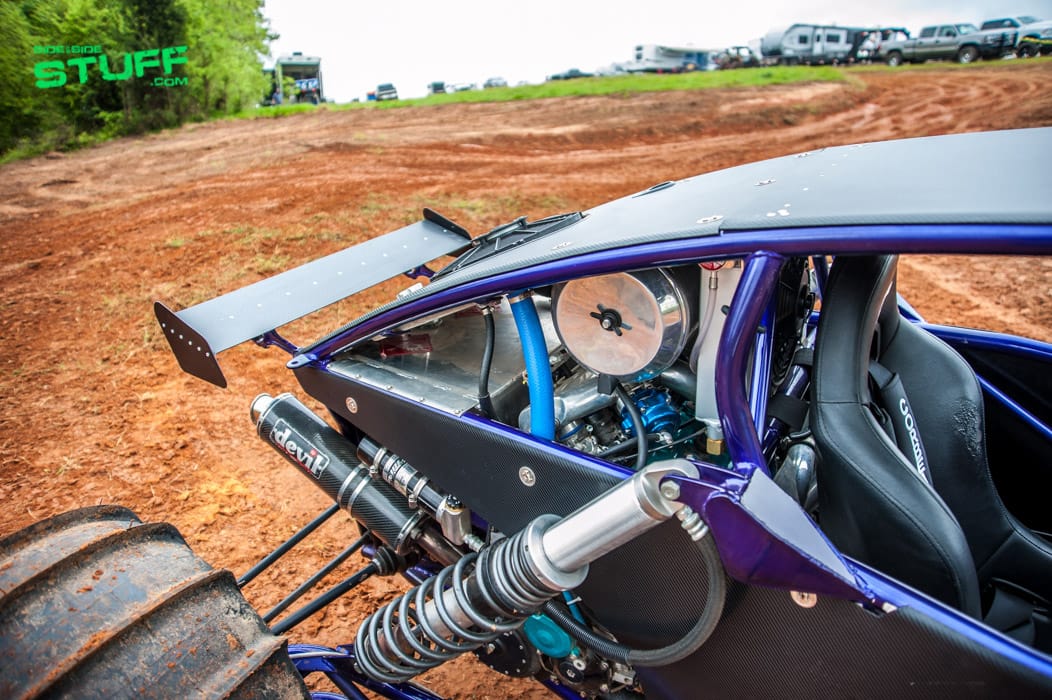 Since then time has only allowed Joey and Jordan to run it at the Snake Hunt UTV event in the sand dunes at Little Sahara State Park in Oklahoma. “We slapped on some paddle tires and a set of MSA wheels and headed for Little Sahara, OK” Said Kacal. “We ran it for three hard days; it ran around everything with a steering wheel.” ( Joey and Jordan went with MSA M23 Battle Wheels with GMZ Sand Stripper Tires in the front, they originally ran GMZ Sand Strippers on the rear but ended up swapping for Sand Tires Unlimited 1300 Plus Number 2 Cuts.) 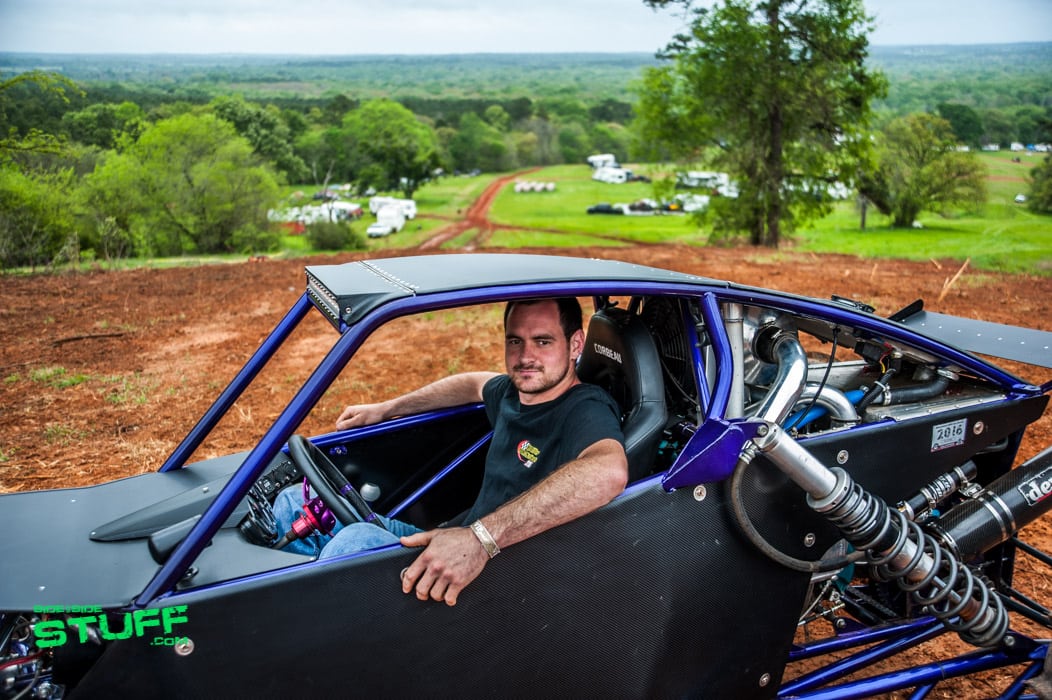 Jordan Dettling in the Turbo Hayabusa Single Seater at the 2016 High Lifter Mud Nationals in Jacksonville, TX. Just before heading to Little Sahara, Jordan brought the car to Mud Nats to enter it in the Show and Shine competition.

Whether you’re customizing a Polaris RZR platform for your own build or turning your side by side into a dune machine, you can find the right UTV parts and accessories for the job at SideBySideStuff.com Badass! I love it! Great job on the build!